http://waspsdomakehoney.blogspot.com/
Posted by Erik at 1:02 AM No comments:

Babe of the day:Jessica Lowndes

I had no idea she was this hot and wow......were her boobs always this hugeeeeeeee 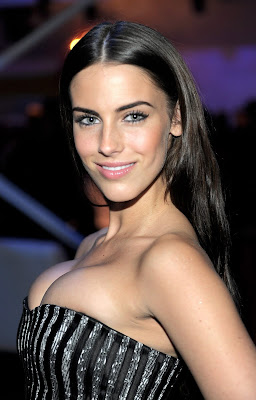 Once again a movie that after seeing the trailers for...looked like it could be something fairly enjoyable.It featured 2 up and coming hotties(Julianna Guill,yes the amazing girl from F 13 2009 and Jessica 90201,Autopsy Lowndes) and what looked like some unique Creature with tentacles pulling a small plane towards it.It sounded good until actually watching or struggling to watch the movie.

The Plot: Rookie pilot Sara(Lowndes) decides to test out her newly minted flying skills by taking her friends to the coldplay concert.Rookie pilot...I'm sure you guessed something was going to go wrong fairly soon and it does as the planes instruments malfunction and mechanical failures ensues slightly after they enter a mysterious cloud-bank.Unable to communicate with anyone through radar, Sara and her friends are left stranded ..flying through an endless mist.But they are not alone....there is some kind of creature with them
The Good:Sara(Lowndes) and Mel(Guill) do a decent job with a horrible script and some of the dialogue left me embarrassed. I actually liked both of their characters and with this script the fact that they came off likable is an attribute to them. 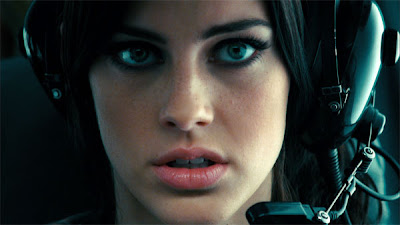 The creature,for the small glimpses we get of it..it looked really cool and unique,too bad we barely see it.

The Bad:Every character besides Lowndes and Guill I absolutely despised and all made such idiotic choices even I was left shaking my head.To top it off I don't know who was worse between Bruce(Sara's love interest..or so we think) and jock,resident big mouth Sal(Jake Weary).I couldn't wait for both of them to bite the bullet.Bruce(played by Landon Liboiron) was so unbelievable it was cringe-worthy and that dumb,confused look on his face half the film didn't help either.Someone get this kid some acting lessons.
The fact that the creature was barely in the movie made things even worse,I wonder why the creature was in it at all,Maybe just for the trailers to brew up interest.

The ugly: I get that this is sci-fi and I'm not one to get on films for being too unbelievable but come on.....tying a rope around someone at 20000 feet to go outside and fix the tail of a plane..really?really? really?...They should have done anything possible to not include that part in the movie.
The Twist....once again...really?really?

Closing:What seemed like a cool direct to dvd movie is actually complete garbage not even worth a rental.Watch the trailer,at least that was enjoyable and you save yourself an hour and 20 minutes of the day. 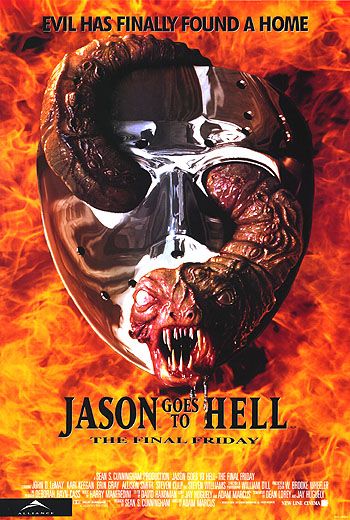 The plot:Jason is blown into pieces and thought to be dead finally,but of course we know better.We then learn that Jason can only be killed by a member of his own..Voorhees family.But who would want that job?.To top things off since Jason wasn't killed by a Voorhees family member at the beginning,he is still alive and better yet..he can transfer his evil over to someone else's body and disguise himself as that person.No way!!!

The bad:I never knew who the main character was until about 40 mins in and then it turns out to be some nerdy guy who thinks he's tough and can stop Jason.
Not enough Jason,he's really not on screen all that much and at this point in the series it couldn't have hurt to put more Jason in the movie.People want to see Jason kill and rip people apart,not some nerdy douche trying to be tough.
The pace..the opening is great but aside from that...it's just really boring and slow...and like I said earlier,not enough Jason.

The good:Nice amount of gore, blood and heart eating plus a sweet scene involving a girl getting ripped apart while she has sex.Did I see an evil dead 2 dagger in this?
Jason's look,I always dug zombiefied Jason and the ripped clothes.
The ending...Freddy's gloves coming up and pulling Jason's mask back down to Hell was definitely the best part of this movie

Overall:Definitely a bizarre entry into the F13th series and one that I normally group in the weaker installments(i.e ones I don't watch very often at all)Watch it for the gore and the ending or just watch the last scene and skip the rest of the movie
5/10
Posted by Erik at 7:27 PM No comments:

babe of the day:Janet Montgomery 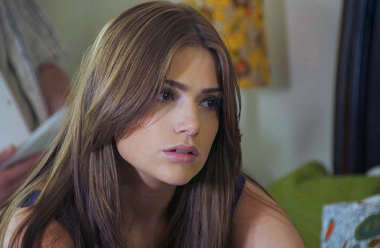 We have a real possession victim in our special features, the problem is people working on it will no longer touch the footage. I'm serious.

People will think it's a publicity stunt but we are actually having difficulty finding people who will finish the DVD. No one will risk it.

No review neccesary,cause if you are any kind of horror fan(Young or old)and you haven't seen this than just ....go make time and watch this...over and over and over again,then slap yourself for having not seen it earlier.

The Evil dead,of course directed by Sam Raimi is definitely one of those movies you can watch over and over and over again...and never get tired of it.I can honestly say I watch it at least once and month.They definitely don't make them like this anymore,low budget meets high imagination is one of my favorite lines I read describing the Evil Dead,it just nails the whole aspect of Raimi's film.

Tree branches sexually assaulting a helpless young women,a pencil not only plunged into someones ankle but repeatdly gouged and swirled around while in there. The we have girlfriends turning into demons and tauting their boyfriends with nursery rhymes,not to mention a plethora of dismemberment's,all done with just the right amound of campiness and creepiness,balancing them perfectly.Raimi also of course used his homemade Steadicam for numerous point of view shots of the demonic force coming at us.

A cult classic that of course has 2 sequels or if you want 1 sequel and 1 remade ..with a bigger budget and both are of course fun but they really don't mix the scares and humor as well as the original did.The Evil dead just has that certain charm about it,no one expected it to become such a classic.
Oh yeah and Bruce Campbell is in this 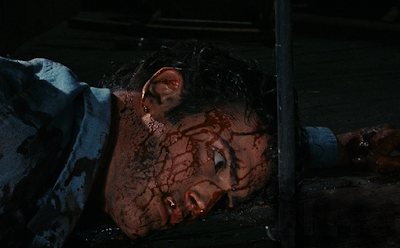 some of my favorite lines
Kill her if you can, loverboy.

You will die! Like the others before you, one by one, we will take you.

I fear that the only way to stop those possessed by the spirits of the book is through the act of... bodily dismemberment.
Posted by Erik at 11:15 PM No comments: