A rather obscure staright to dvd movie that I had never heard of.After reading the description on the dvd case I decided to give it a shot.plus for 9.99 you can't really go to wrong.Worst case is that in goes into your never-watch again DVD pile.I kept my expectations low so I wouldn't be dissappointed.
The basic premise is a girl who forgets who she is or where she comes from wakes up inside a casket,only to escape andfind out she is really chased a by a killer known as Chrome-Skull who guess what.....wears a chrome skull mask. 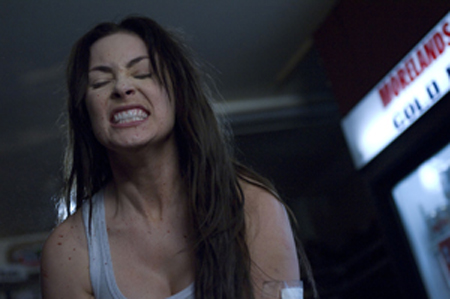 Now where this film really stands out is the gore and violence.It was definitely the best part by far of this film.Victims range from being gutted from chest to stomach,to your face being ripped in half,to your intestines start to fall out,to having a knife plunged into your jaw,and to your neck being slashed and head eventual decapitated and thrown.It was clear this film was meant to be a throwback to the 80s styles slashers with this and the fact that there sin't much of a story
We never really find out why chrome-skull is doing this and what his motives are,if he has any,but in a way I guess that works cause I find it better when we don't know the motives of killers.
Chrome-Skull is definitely a cool masked villain.He is violent,fast and menacing.Credit to Nick Principe for adding to the character by actual being somewhat human and not some hulking giant presence who is unable of being hurt.Another nifty aspect besides the mask is that he wears a camera on his shoulder to videotape his victims. 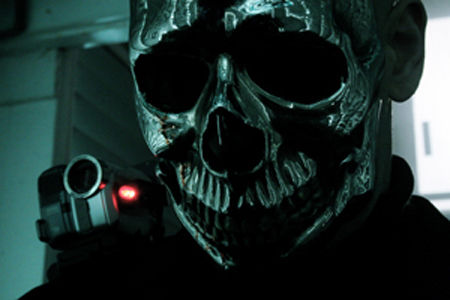 The only complaints I really have are that the characters make some horrible decisions and there is some real questionable dialogue,some of it downright laughable.Who today relies on a computer to contact the police.What decade are we in?
All in al though I definitely enjoyed it for what it was.
Directed and written by Robert Hall and has cameos by Lena Headey and Kevin Gage as well as Sean Whalen.
Posted by Erik at 5:13 PM