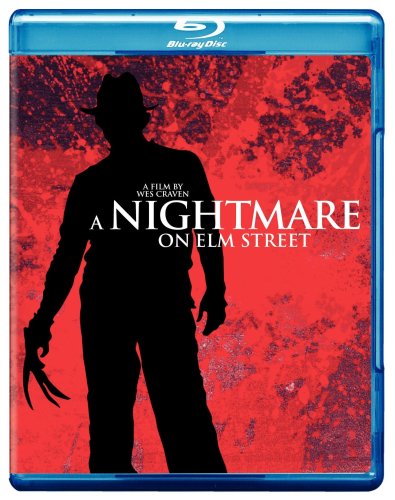 I don't need to review the actual movie itself,cause I'm pretty sure everyone and their mother has seen this,though judging from today's youth...I may be wrong.I can see it now already, when I see A Nightmare on Elm Street(2010)there is going to be some young douche bags who don't know a thing about horror saying the original was lame.I will say a few things about A Nightmare on Elm Street.

Anyways ANOES and Freddy have always been the scariest of the big three(Freddy,Jason,Michael Myers) to me.In particular the first one, it is chilling.The music,the Freddy's coming for you nursery rhyme,the boiler room,Freddy's laugh,Freddy coming through the wall,Tina being dragged through the school in a bag.So many grisly images.Another thing that always made Freddy scarier to me was that he's not the silent stalker type,he will laugh,talk,mess with you and have a good time while he's trying to kill you.Perfect example is when he is chasing Tina and he stops and say's "watch this" and cuts off his own fingers.He has more fun killing than any of the others.The other part that really stands out to me is the fact that he can kill you in your sleep,I was genuinely afraid to go to sleep after I saw this when I was young,I would keep my light on for as long as I could,and just lay there hoping not to fall asleep.And Wes Craven actually got the idea of people dying in their sleep from actual articles based on true stories.For its time ANOES is quite graphic and the blood flows, and flows,and flows....in massive amounts.I'm surprised it was able to get past the MPAA.Sure some of the effects are now a bit dated but that only adds to this and makes it feel even more retro.The acting is quite good also,Englund is superb as the diabolical Fred Kreuger and Heather Langenkamp is convincing and quite likable.Of course Johnny Depp got his start in this movie.John Saxon also gets a notable mention.

The Picture:Easily this is the best ANOES has ever looked.It's pretty amazing what they can do nowadays with some of the older 80s movies.The clarity for this film is amazing considering its about 25 yrs old now.The picture is crisp and sharp and you can see some details you have never noticed before(particularly Freddy's rusted beat up glove and sweat beads on characters faces).The colors are vibrant but not overly bright where it takes away from the picture.The only complaint is that there is some grain in some of the night time scenes.
Extras
Audio Commentary-self explanatory
Never sleep again-background on Craven and the origins of ANOES
The house that Freddy built-How ANOES impacted New line and other horror movies
Night terrors-what happens when we sleep
Alternate endings-3 of them
Fact track-same as the infinifilm dvd
Focus Points-viewers get to see an alternate take on a particular scene when the screen prompts
Closing-If you own a blu-ray player or PS3 this is the best a ANOES has ever looked and is a must have for any horror fan.
9/10
Posted by Erik at 12:06 AM